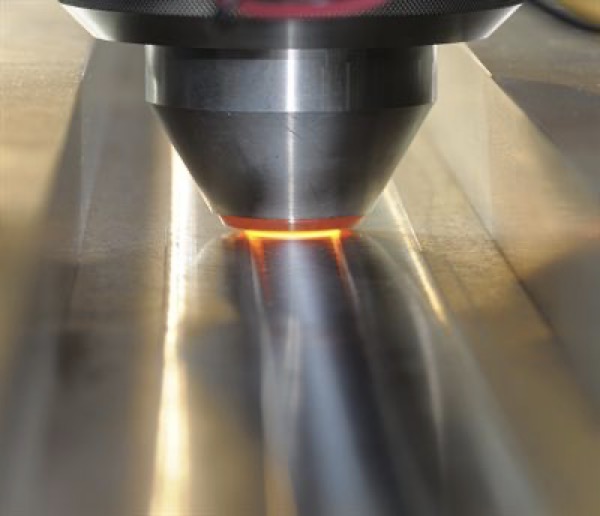 Friction welding is to realize the solid-state welding approach. Under the effect of pressure and with the effects of constant or increase pressure and torque, the relative motion between the welding contacts generates the heat of friction and plastic deformation heat. This effect increases the temperature in the neighboring area to the temperature range which is slightly lower than the melting point. The material’s resistance to deformation is reduced and its plasticity is enhanced. As the oxide film on the interface is ruptured and with the effect of upsetting pressure, the material generates plastic deformation and begins to flow. The molecular diffusion and recrystallization therefore realize the solid-state welding approach.

During the friction welding process, the welded material usually does not melt and is still in a solid state, and the metal in the weld zone is a forged structure (Figure 5-4). Compared with fusion welding, there are significant differences in the formation mechanism and performance of welded joints. Firstly, friction welding joints do not produce some welding defects and welding embrittlement phenomena related to melting and solidification metallurgy, such as coarse columnar crystals, segregation, inclusions, cracks and pores, etc.; secondly, axial pressure and torque work together on friction welding The surface and its near area have produced some mechanical metallurgical effects, such as grain refinement, dense structure, dispersion of inclusions, and the “self-cleaning” effect of the friction welding surface; furthermore, the friction welding time is short, and the heat affected zone Narrow, no obvious coarsening of the heat-affected zone structure. The above three aspects are all conducive to obtaining a strong welded joint with the base metal. This feature is the key factor that determines the excellent performance of friction welded joints.

The above characteristics also determine that friction welding has a wide range of process adaptability to the material to be welded. In addition to traditional metal materials, it can also weld new materials such as powder alloys, composite materials, functional materials, refractory materials, and is particularly suitable for dissimilar materials, such as aluminum-copper, copper-steel, high-speed steel-carbon steel, high temperature Alloy-carbon steel welding, and even ceramic-metal, cemented carbide-carbon steel, tungsten copper powder alloy-copper and other dissimilar materials with very different properties can also be joined by friction welding. Therefore, in order to reduce the structural cost or give full play to the respective performance advantages of different materials, when dissimilar materials are used, friction welding is one of the preferred ways to solve the connection problem. For some new materials, such as U700 high-aluminum and high-titanium nickel-based alloys used in high-performance aircraft engine rotor parts and AISI4340 (300M) ultra-high-strength steel used in aircraft landing gears, due to the high content of alloy elements, the use of fusion welding may be Cracks occur during welding or post-weld heat treatment, and the weldability of fusion welding is poor, and friction welding has been confirmed as the most reliable welding method for welding such materials.

Friction welding also has a wide range of structural dimensions and adaptability of joint forms. The existing friction welding machine can weld medium carbon steel workpieces with a cross-sectional area of ​​1~161,000 mm2. It can be used for tube-to-tube, rod-to-rod, rod-to-tube, and rod (tube)-to-plate welding. Tubes and rods can also be welded to the chassis and protruding parts, and accurate positioning can be achieved at any position.

According to a report by the American GE Company (ie General Electric Company)[8], when the large section and thin wall (diameter is 610 mm, the wall thickness is 3.8 mm) compressor disc of the TF39 aeroengine is welded by inertial friction, the welding cycle time only needs to be About 3 s; the welding cycle time of American HUGHES (Hughes) company welding high-strength, large-section oil drill pipe (diameter 127 mm, wall thickness of 15 mm) is only about 15 s. Generally speaking, the production efficiency of friction welding is one to one hundred times higher than other welding methods, which is very suitable for mass production. If equipped with mechanized devices for automatic loading and unloading and auxiliary processes before and after welding, production efficiency will be further improved.

Friction welding does not require a special welding power source, the energy required is only about 20% of the traditional welding process, and it does not need to add other consumable materials, such as welding rods, flux, electrodes, shielding gas, etc., so it is an energy-saving and low-consumption The connection process.

The friction welding process does not produce sparks, splashes, smoke, arcs, high frequency and harmful gases and other pollution sources that affect the environment. It is a clean production process.

In addition, friction welding also has the advantages of easy operation and low requirements on the welding surface. Its limitation is limited by the shape of the welded parts, that is, at least one part of the friction pair is generally required to be a rotating part. At present, it is mainly used for welding cylindrical and axially symmetrical parts. However, the recently studied phase control friction welding, linear friction welding, and friction stir welding have successfully solved the welding problems of non-cylindrical components with asymmetric axis and phase requirements and even plate butt joints, and further expanded the application range of friction welding. .

In short, friction welding is a high-quality, high-efficiency, low-consumption, and clean advanced welding manufacturing process. It has huge technical potential and broad market application prospects in high-tech industries and traditional industries. Through close integration with computer, information processing, software, automatic control, process simulation, virtual manufacturing and other high-tech technologies, friction welding is showing up in front of people with a high-tech appearance 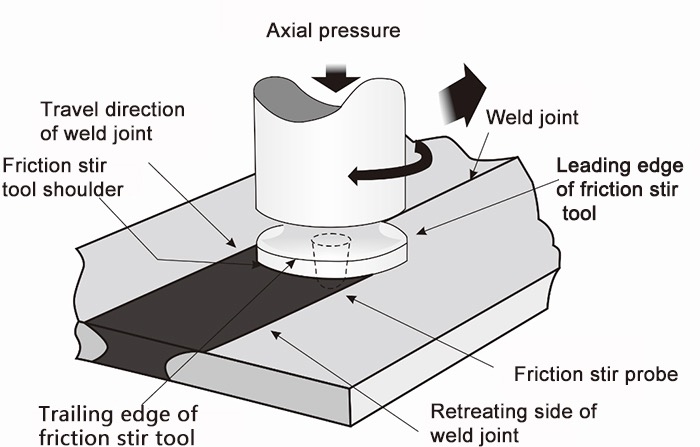 As compared to conventional welding approaches, friction welding’s major difference is to keep the increased temperature due to the energy obtained by the metal to be welded below its melting point. That is, the metal is welded under the solid state which is similar to forging under its thermoplastic state.
As compared to conventional welding, friction welding has the advantages of higher-quality welded connections which meet the requirements of seam strength and base material strength, higher welding efficiency, stable quality, better consistency, and the realization of dissimilar metal welds.

Invented in 1991 by a group of researchers from Wayne Thomas and TWI, UK, friction stir welding has evolved from being a new method of joining thin-section aluminum alloy parts that has been proven in the automotive and aerospace industries to a revolution. Sexual and adaptable methods. Engineering processes with far-reaching industrial potential can be used to join light metal alloys including titanium, as well as steel and other thicker parts of hard metals.

The advantages of friction stir welding in terms of processing speed, welding strength and integrity, welding environment safety, energy efficiency and cost reduction are being realized by more and more manufacturers around the world. So far, connection technology has been selected for engineering design solutions or process development by 231 organizations in 24 countries. About half of these organizations are end users; the other half are research institutions, equipment suppliers, and academia—mostly located in the United States, Japan, China, Germany, and Sweden.

As a process inventor, TWI holds patents for the basic method of friction stir welding (described below) and several variants, and continues to promote innovations in its variants and improvements through internal R&D programs. TWI is also actively preparing world standards and guidelines related to the use of welding processes.

In terms of advanced applications that proved the success of the process, friction stir welding has been applied to many space launch vehicles in the world, including the Space Shuttle, Delta II and IV, SpaceX Falcon 9 and Ariane.

In the railway industry, this process is used to produce aluminum rail cars, including Hitachi super high-speed trains (Shinkansen) that can reach speeds of 320 kilometers per hour.

Friction stir welding is also widely used in the aerospace industry by Boeing, Lockheed Martin, BAE Systems and EADS, especially in some applications in Eclipse, Boeing, Spirit and Airbus aircraft.

Other uses of the welding process include professional automobile manufacturing by companies such as Audi, Ford, and Mazda, as well as the manufacture of large radiators and the construction of ship superstructures.

Can’t find the specific information you’re looking for? Have a question ? Contact Us